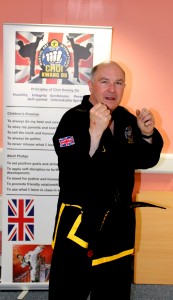 On the 9th March 2014, I stood in the Tipson CKD dojang waiting to start the exercises that I needed to complete in order to be awarded my 1st. Dan (Il Dan) black belt in the incredible martial art that is Choi Kwang Do and thought “How did I get here?”

It seemed amazing to me that I was about to achieve something that had always felt out of reach to me. I was not very good in any  sport at school and had not been involved in any sport after his mid-twenties, largely due to leaving most of the inside of my right knee on the controls of a motor cycle when I crashed it into the side of a car at 40 miles per hour; and this with my wife of 6 days on the back of the bike. This was not the best start to married life and it left me with a knee injury that prevented me from doing any physical activity other than walking, cycling and swimming. So, how did I find myself about to achieve a black belt in a martial art?

My son had achieved his black belt in another martial art and had been badgering me to have a go at it for a couple of years when I spotted a large sign on the large doors of a warehouse that was in the lane at the back of Horsham railway station. It suggested that people try the martial art for a couple of weeks before committing to it. That seemed reasonable so I contacted Stuart Clarkson and he told the evenings on which the classes were taught and in mid July 2011 I started my first lesson. It was a joy. I could do the basic exercises and I was particularly pleased to be able to kick and punch an air shield as part of it. Despite weighing 18 stone & 8 pounds at the time, I felt invigorated, sweating profusely and, more importantly, my knee had not buckled or locked out. WOW!

After another 5 sessions over the next two weeks, I signed up and received my first, white dobox (CKD outfit) with a white belt. I had met some lovely people who were, and are, incredibly supportive. I had joined this wonderful family that is Horsham CKD. I later discovered that the whole of the CKD community is one big family of very supportive people. Over the next two months I was taught and practised the blocks, punches, kicks and pattern at white belt level. I found an amazing teacher in Stuart; as a former teacher of maths in secondary schools and further education college, as well as a trainer of trainers, I studied his technique and was impressed with the ease with which he helped all of us to learn the exercises that we needed to do in preparation for our next grading. More importantly, I was making progress without hurting myself.

In September I did my first grading at Mr. Alan Tipson’s dojang in Dorking. I passed and received my senior white belt. I continued to train with all the instructors and assistant instructors at the dojang, usually doing 4 sessions per week. Over a year and a bit I lost nearly 4 stones in weight. WOW! NEARLY 4 STONES! I was thinner, lighter, fitter, more supple and healthier than I had been since my mid-twenties.  I had progressed to blue belt level. It was at this point that my wife and I moved to Ashington. This meant that I could no longer train with Stuart but I wanted to continue with the martial art. Stuart suggested that if I was to practice on my own, it would be possible for me to continue through the grades. I liked the idea so when we moved to Ashington I hunted around for a gym or leisure centre that had a space in which I could practice the blocks, punches, kicks, patterns and speed drills for the next level. I did not intend to more than a grading every couple months but when I met with Rob Story at The Hirst Welfare Centre, he asked when I could start teaching the martial art. I explained that I was only and Assistant Instructor so was not allowed to teach yet. He then asked me how soon I could qualify to teach. This spurred me on and, with Stuart’s help and support, I took a grading each month. I travelled to Surrey each month and stayed with my brother. He is brilliant. His hospitality enabled me to train with Stuart and the gang at Horsham CKD for a few days before I took part in the exercises that I needed to do in order to achieve the next belt. I did this every month apart from one until in December 2013 I graded for my Senior Brown belt and was taught what I needed in order to achieve my black belt. Over the coming three months I trained three to four times per week and relearnt all the kicks, punches, patterns and speed drills for all the belts up to and including brown senior. In doing this I improved my fitness level as well as developing muscle memory for each of the exercises that I was to do.

That is how I found myself on the 9th March 2014, at the tender age of 60, preparing to do what was necessary to achieve this amazing result. I was supported on the day by my wonderful son and a fellow student, Caroline. They seemed more chuffed at the end than I was. It was not that I was I being modest but their reaction made me realise how difficult it seemed to anyone who had yet to achieve this result, although in my son’s case, despite already having a black belt in another martial art, he saw his “OLD2 man achieving this for himself. I realised that ANYONE who was willing to do as they are taught and is willing to put in the practice can achieve anything they set out to do and will commit to. ANYONE! This why I encourage anyone who wants to get a little fitter, lighter and more supple while developing increased confidence, self-control and self-esteem, to participate in this wonderful martial art and is why I am starting classes in Ashington.